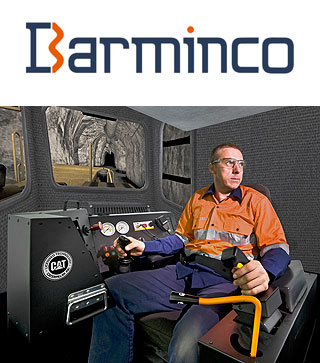 SIMULATION training has converted one sceptic in Barminco CEO Neil Warburton. The 30-year underground mining veteran is waiting for results of a six-month assessment program before committing to a hefty investment in the technology. But he already seems quietly confident about the outcome.

Barminco and Australian simulation technology company Immersive Technologies announced an alliance of sorts late last year after Immersive launched its UG360 underground training simulator in August. The contractor bought one transportable UG360 simulator, truck and loader ‘conversion kits’, and a custom mine site virtual environment program, under the initial purchase deal. Not an insignificant outlay, but Barminco will make a multi-million-dollar investment in simulators and software before the end of 2011 if training with the first unit produces the maintenance cost, productivity, safety and other gains being targeted by Warburton.

One of the world’s biggest specialised underground hard-rock mining contractors, Barminco will start using the first simulator in its home state of Western Australia in March. Warburton, though, already sees significant training gains to be made via the company’s expanding African contracting business where it currently has about 450 employees.

“We’ve been looking for simulators now for some time,” he told HighGrade.

“We’ve got some 1650 employees in Australia, and another 450 employees in Africa through the African Underground Mining Services business [joint venture with Ausdrill]. We also have the underground contract with Centamin Resources in Egypt. We’ve got a lot of green operators coming into our organisation, and as we expand we need to train these people to productively and safely operate our modern underground mining fleet. We’ve been out looking for a company that is world renowned; that has got the ability to grow with us internationally as well as domestically, and Mark [Adams, Barminco chief operating officer] and our team have been driving that and we believe the Immersive Technologies guys have got that ability.

“We’ve got a double-edged strategy – certainly screening and training the green people initially [with the simulator] to make sure they have the right abilities before putting them on a brand new truck worth $1.8 million. They get very limited training [in the environment] before they’re down the hole driving these large, brand new machines around, so we see some damage. It’s probably not caused directly by their inability to drive the truck, but their inability to handle the underground conditions.

“And that is in Australia, where we probably have the best and safest operators in the world. We’d have about 140 truck drivers here and as we build up more people will be required, so we’ll be screening those people.

“But in addition to that the second part is to train up our existing workforce to minimise the amount of damage, or control situations they get themselves into underground, where hopefully they can avoid damaging the machine, or drive the machine in a way that minimises the operating costs on the machine.

“I don’t want to quote the [current unscheduled maintenance] cost, but we are going to have a program where we’re going to be able to over a period of time keep a record of the improvements and the cost savings generated for Barminco. We can track what the maintenance cost per hour has been in the past  against what the maintenance costs per hour is in the future, taking into account obviously as the gear gets a bit older. But on average we will be able to tell the improvement in our driving fleet and then translate that into productivity for our clients.

“In other words, if the fleet is not damaged or it’s got a greater availability … we’ll be able to produce more product for our clients. And obviously by doing that we make more money, they make more money and everyone is happy.”

Immersive has led the global surface mining equipment simulator supply sector for a decade but has followed others into the underground market after spending three years developing its debut product. The company’s joint founder and CEO Peter Salfinger said Immersive didn’t want to enter the underground market until it was confident it could provide the industry's best simulator.

“The UG360 achieves that goal and we look forward to helping Barminco achieve its business goals,” he said.

Salfinger said a positive reception for the UG360 technology extended to two other underground mining customers in Australia while Immersive had “a number of additional UG360 simulator deals underway” outside Australia.

Immersive has unique technical data exchange alliances with Caterpillar, a leading supplier of underground mining equipment as well as surface, and several other major mining equipment manufacturers, contributing to the accuracy and authenticity of its simulator conversion kits, which replicate different machine controls and settings. Immersive offers only Caterpillar truck and loader conversion kits at this stage.

Barminco and others are big users of Cat underground loaders (Barminco has about 60 loader operators), so that base is covered.

But given the contractor’s recent major investment in Atlas Copco 60t-payload underground mine trucks (see separate story in this edition of HighGrade), Immersive will need to forge a new alliance with that manufacturer to ensure the same level of simulation fidelity if it is going to meet the contractor’s need for simulator training of operators. It also has competition on the underground drill rig simulator front from equipment makers such as Atlas Copco, and other simulation technology companies.

“One thing we don’t want to do is spend a lot of money on simulation training if it doesn’t really have the results we want,” Warburton said. “It will be result driven and it’s got to be cost-effective for our organisation to go ahead with it.

“I think the technology [for underground operator training] to this point in time has been average. It’s been based on surface simulation, and underground simulation is completely different. You’ve got restricted views, you’re in a confined space, there are lot of different things that happen underground compared to driving a truck in an openpit, so the simulators that have been designed in the past have only partly met the criteria.

“This simulator that we’ve gone in with we believe is very good.

“When Mark said this is what we should do, I said, well I’m not a big fan of simulators because I’ve seen them in the past and they haven’t been effective. I went off and actually drove it, and said, no, this is actually very good. This is right up to the mark, and we should go ahead with it.

“You’re encased in a 3D environment with screens everywhere; the noise, the bumping on the wall … it is very much like being underground. And having worked in the underground sphere now for about 30-odd years I was very impressed with it.”

“I would think we’ll have some pretty quick positive impacts on our performance and availability of equipment within 3-6 months,” he said.

Barminco would then buy multiple simulators for distribution around Australia and Africa, where Warburton sees a project pipeline perhaps three times bigger than the $A1 billion of opportunities he currently sees in Australia over the next 12-18 months.

“But that’s the next step. We would think we would be buying up to half a dozen of these simulators, to place them in Ghana, Mali … other states of Australia, if we are getting the results that we think we can get from the first one.”

Immersive Technologies is the world's largest, proven and tested supplier of surface and underground Advanced Equipment Simulators to the global mining industry. The company has achieved this unique position by focusing on its mission to make every mining and earthmoving equipment operator in the world safer and their employer more profitable through its simulation technologies. Immersive Technologies' Advanced Equipment Simulators are helping hundreds of mining companies around the world to increase their equipment operators' safety and site profitability through effective simulation training.

Immersive Technologies provides its customers with the most effective Advanced Equipment Simulators available. This is made possible through the formal exclusive licensing and technical information alliances Immersive has established with the leading Original Equipment Manufacturers (OEM), including: Caterpillar, Hitachi, Komatsu and Liebherr. These unique alliances provide Immersive Technologies with exclusive access to the OEM's proprietary and confidential machine technical information that is required to correctly simulate the OEM's machines and is not available through other public or dealer channels.