As the coal mining industry in Indonesia seeks increased output, the need for quality workforce development tools has also increased. A holistic solution was needed to develop competent heavy equipment operators with a high awareness of safety, productivity and machine care. That demand was answered by the PRO5 Advanced Equipment Simulator from Immersive Technologies.

Launched at MINExpo 2021, the PRO5 Advanced Equipment Simulator set a new benchmark in realism, reliability and training value for operator training technology. PT. Putra Perkasa Abadi (PT. PPA) became the first company in Indonesia to incorporate the new technology by acquiring the first two out of four platforms ordered by PPA, these two simulators were commissioned in the PPA office at the PT Multi Harapan Utama mine site.

Equipped with a professional grade visual system, the PRO5 is the first mining simulator to combine stereoscopic 3D, a one-piece curved display, photo-realistic graphics and RealView™ head tracking technology. The PRO5 delivers realism at a level not previously seen by the mining industry. These advancements help new and experienced mining equipment operators develop competencies at a rapid pace, while maintaining high levels of learning retention.

Director of PT. PPA Teguh Sapto Subroto in his speech, emphasized the importance of sustainable workforce development. "I, as part of the management team at PPA am very proud, finally we have our own simulators to support the vision and mission of the company”.

According to Teguh, “In the midst of intense business competition, the company must be pro-active in people development and remain agile in their approach. In the mining business, there are three things that need to be managed exceptionally well, those being risk, workforce competency and capital. The investment in operator training simulators gives us a powerful tool to drive real value from these areas.

Previously in order to improve the competence of newly graduated workers, PPA’s only option was on-iron training. This of course takes extra time and also has safety risks. Now, these novice “green” workers can develop psychomotor skills and learn critical behaviors in a safe, simulated environment, while also reducing fuel consumption.”

PPA is a mining contractor which in recent years has recorded significant growth, they are currently the third largest contractor in the Indonesian mining industry.

The speed of growth requires an investment in the workforce and training tools to become more effective and efficient and to prepare personnel to become mine-ready. This year the PPA is targeting an additional 100 million BCM above last year's 267 million BCM. In order to achieve this target, an additional 3,200 to 3,500 operators are needed. They also need an additional 1500 to 2000 mechanics. "We are rising to the challenge of producing high quality talent, with some of our new-hires starting at a basic level," Teguh explained.

PPA targets an addition of 150 million BCM next year. To meet the target, the company needs more or less 6,000 mechanics and operators ready to work.

To onboard 6000 workers can no longer rely on outdated training techniques. "Simulators will help us to develop personnel at a safe and steady pace, independently of disruptions such as weather conditions. We need this technology," Teguh said.

However, Teguh explained that before arriving at the decision to buy four PRO5 Platforms, PPA had made an in-depth study of simulation vendors and related solutions. This involved proof of concept product testing from Immersive Technologies.

"The biggest challenge in workforce development is to rapidly develop quality talent with the skills to be safe and productive. If you recruit well, you will compete with others, but skill levels may remain 30% below ideal. To produce a quality workforce, you need the right tool that make humans more efficient and effective," Teguh said.

The simulator will later be managed by PPA Academy. Sunaryo, Head of PPA Academy stated that the presence of this simulator really helps companies increase the competence of both new and experienced recruits.

"Thank you to BOD of PT. PPA for giving PPA Academy a mandate to manage assets that are a significant investment. It meets the expectations of all of us in improving competence. It is hoped that the presence of the simulator will improve our abilities and skills so that in the end we will have increased our safety and productivity," said Sunaryo.

He acknowledged that collaboration is key to success. "Synergy is a critical element to make good use of this technology. By collaborating we will be effective and meet the set of targets," he concluded.

Teddy Ramdani, Customer Support Manager of PT United Tractors Tbk said that this latest PRO5 simulator has only been available to the market for a short period of time and PPA incorporated it rapidly because of the value it could bring. "Hopefully it can help PT. PPA in building worker competencies, especially for operators. PPA recorded the highest growth in the industry which must be balanced with the quality of qualified workforce," said Teddy.

He then emphasized that getting an operator who is immediately proficient is also not easy. "In the past, to train the operator, you still had to take a truck and be accompanied by the trainer. Hopefully, with this product, competency standards can be built efficiently and do not interfere with operations," he concluded.

“This PRO5 simulator is the cutting-edge product from Immersive Technologies with the latest evolution of display systems. It is a combination of seamless curve screen with stereoscopic 3D technology which provides unmatched training value and highest levels of learning,” he closed his remark. 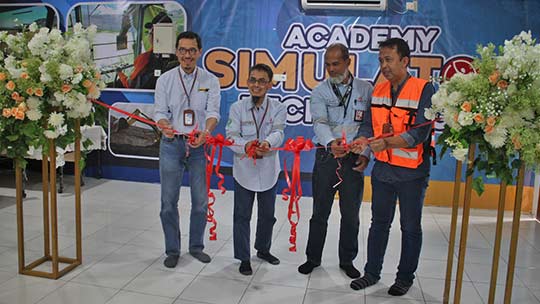 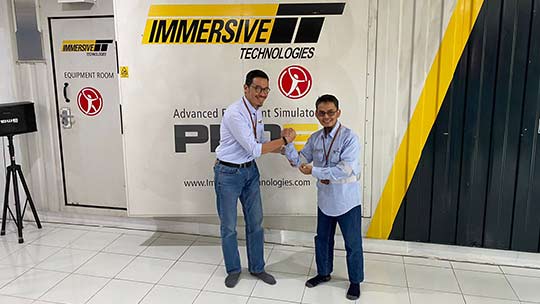 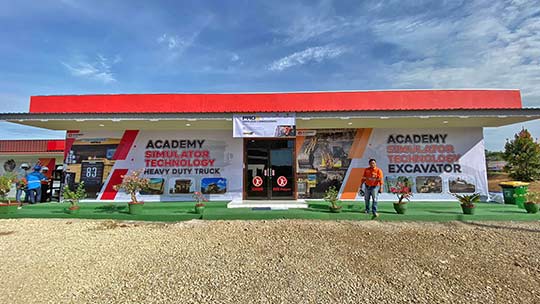 Immersive Technologies is the world’s largest, proven and tested supplier of surface and underground Advanced Equipment Simulators to the global mining industry. The company has achieved this unique position by focusing on its mission to increase Customer profitability by optimizing the safety and productivity of their operators. Immersive Technologies’ Advanced Equipment Simulators are helping hundreds of mining companies around the world to increase their equipment operators’ safety and site profitability through effective simulation training.